Create an Account - Increase your productivity, customize your experience, and engage in information you care about.

We continue to make progress toward the three (3) primary projects being funded by the Proposition E Sales Tax passed by voters in 2018, namely flood mitigation, replacement of the Allenton Bridge and a new Police Station.  As of August, 2020 approximately $2.5 million has been generated by this sales tax, and approximately $1,264,000 has been spent ($1,040,300 on Flood Mitigation, $210,000 on the Allenton Bridge and $14,300 on the Police Station).  Pursuant to State law, this sales tax can only be imposed for 20 years, so there is a limit as to how much will be available to fund eligible projects.  Additionally, not surprisingly, as a result of the impacts of COVID-19, sales tax revenue has been and will continue to be lower than initially projected.  Following are updates on the three (3) primary projects identified for funding under Prop E:

The City's Consulting Engineer has developed a concept design for a four (4) lane bridge with a multipurpose trail crossing which could potentially tie into a future trail system in the area.  There are numerous issues which much be addressed, including meeting railroad crossing requirements and MoDOT regulations.  We are working with the BNSF Railroad with the at-grade crossing component, and with the Union Pacific Railroad toward satisfying their vertical and horizontal clearance requirements.  While we are very close to obtaining BNSF Railroad approval, our discussions with the Union Pacific Railroad continue since the field conditions are making it difficult to meet their clearance requirements.  The new bridge will be constructed adjacent to the location of the current bridge so it will continue to have alignment with the rest of the interchange.  One of the project challenges is designing the grade of the bridge approaches to meet the grade of the adjacent interchange in a manner which satisfies MoDOT requirements. 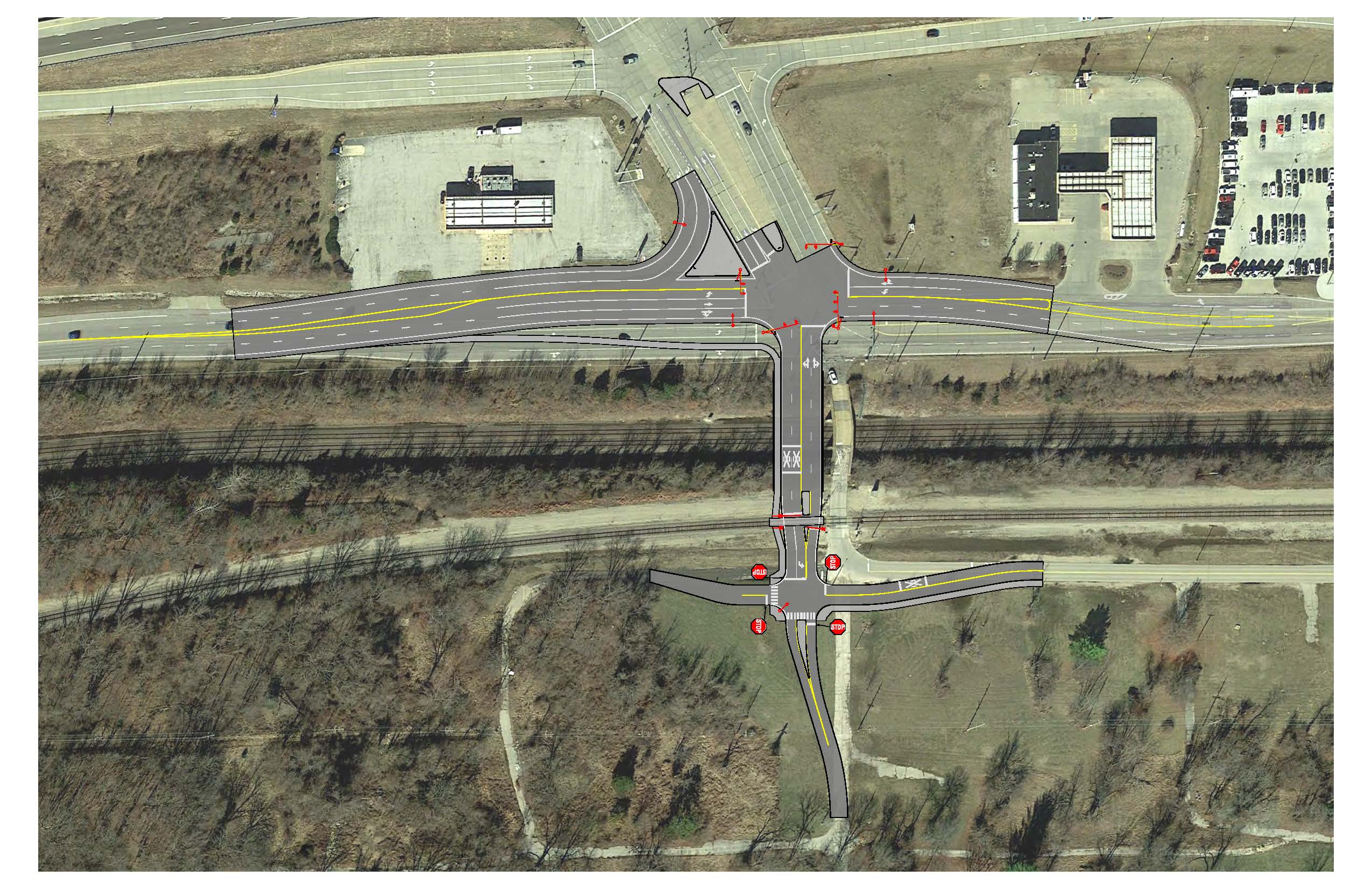 There has been significant activity toward efforts to greatly reduce the likelihood and impacts of flood events.  The most substantial part of our flood mitigation project is the proposed placement of flood walls in a few strategic locations to hold back flood water due to what is called a backwater condition.  This is when we experience flooding due to streams, creeks and rivers not being able to handle the flow of water within their normal banks, usually as a result an extraordinary amount of rain and snow melts.  The major floods the City has had over the years such as in 1982, 1993, 2015 and 2017 have all been as a result of Meramec River backwater.  The City's engineer is working closely with the U.S. Army Corps of Engineers toward obtaining the necessary approvals for construction of these flood walls.

We have been taking other more immediate measures to help protect against some flash flood events by enhancing capacity and particular flow.  These efforts include debris removal from creek channels to enhance flow and stabilizing creekbanks on some segments of creeks located on City property, such as the project presently underway through Lions and Legion Parks.

While our commitment remains to fund a new police station, there hasn't been a tremendous amount of activity on this project lately.  Among the factors is determining the level of funding available based in part on the estimated cost of the Allenton Bridge and flood mitigation efforts.  We hope to soon have preliminary estimates on the other projects in the near future as we look forward to begin design and construction of this much needed facility.

Periodic Updates on All Projects

We will periodically post project updates as we have progress to report to keep you informed, including some estimated time frames when projects are at a point of having construction schedules.  As is the case with all major projects, a significant amount of the progress takes place behind the scenes, including very lengthy steps such as planning, design, engineering, obtaining approvals and many others.  We are making significant progress particularly toward the Allenton Bridge and flood mitigation projects, and look forward to reaching the point where such progress will be visible in the field.